The Rososhany border crossing did not look far from Kamyanets-Podilskyi but the road from Khotyn to Rososhany was worse than imagined. Trucks had left heavy imprints on the tarmac, which had formed giant grooves and in some parts, if you drove too quickly you would hear the oil sump cover, bumper or undercarriage grind against the road surface.

The border crossing itself was rather low-key. When we got there, there were two cars in front of us waiting behind a barrier. The barrier was broken which was keeping both the border guard and the driver of the car at the front occupied in trying to fix it. Eventually, a local villager turned up with a tool kit and we were on our way.

As was the case when entering Ukraine, a border guard wrote down the license plate and the number of people in our car then handed us the piece of paper. Leaving the country was rather straightforward. We were waved through the barrier, we parked up with the other two cars and were greeted by a customs officer who asked me to open the boot and then said ‘clothes?’  That was the interrogation over. Next up, the passport officer asked where we were going and seemed happy we were going to Orhei, he then ran the passports through his computer system. Last up was the vignette window. You need to buy road tax to drive in Moldova, which costs 3 euros for a minimum of 8 days. I only had Ukrainian Hryvnia on me but he took me to a ‘bank’ office located behind the vignette office, where they changed the money and sorted out the purchase of the tax. This chap, also happy we were going to Orhei, spoke quite good English and was an all-round friendly guy. We had high hopes for Moldova after this first encounter.

We made our way through the dusty town of Briceni and it quickly became apparent that Moldovan roads were a lot better than expected. Moldova was green with lots of rolling hills with fields full of vines and horses. We skirted round Balti and the road got better and better until it was a bit like a race track devoid of traffic. On reaching a crossroads, we followed signs for Orhei – 34km, which would give us our first taste of rural Moldova. The road gave way suddenly and we drove about 12-13km on a dirt track, I was hardly pussyfooting around but got overtaken by two large Russian built-trucks (Gaz-53B) that were absolutely flying. Eventually, the tarmac made a comeback and we rolled into Orhei to go to the bank and buy provisions. 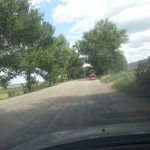 Moldova took me by surprise. The roads were way better than expected, although poor, it was more modern than I thought. You’ll see more horses plying the roads in Romania and older Soviet-style vehicles in Ukraine. On many blogs, you’ll find Moldova described as ‘dirt cheap.’ Sure, if you’re coming from Norway then things are cheap but in fact only alcohol, cigarettes and fuel are cheap. Accommodation is relatively expensive, meals out are comparable to Polish or Czech prices, as are food products in the shop. Then there’s the hospitality – if you’re expecting something like a Georgian welcome, forget it.

We stayed at Casa din Lunca, which had received quite good reviews on Booking.com, I was hoping it would be the highlight of the trip. Unfortunately, the pool was nearly empty and dirty on arrival. It was hard to get exact prices for everything, the bill seemed inflated and I had to
quibble about it. Everything was charged in euros as opposed to local currency and their currency conversion seemed to be suspect. The homemade food, though costly, was very good and came as a nice change from the heavily fried foods of Ukraine we’d grown accustomed to. 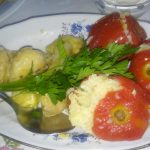 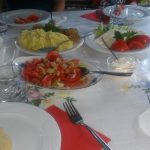 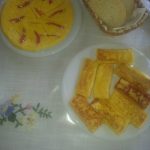 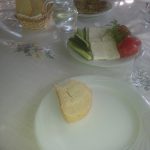 Quark, tomatoes and cucumbers appeared with most meals 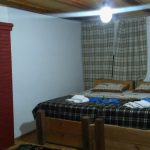 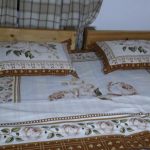 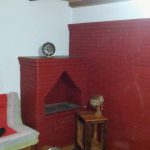 Old Orhei is one of the ‘must see’ sights in Moldova. The village of Trebujeni is surrounded by what looks like a giant moat. The river carves its way through large banks, caves are built into the escarpment and there is a church on top. At first sight, it’s quite impressive. The Old Orhei complex is badly organised, there are no signposts and the map sold in the administration office is poor. One of the caves is accessible through a door located behind the first church tower, it is easily missed so look out for it!

Everyone we met, whether people in the administration office, local shop, villagers or people at souvenir stands, seemed annoyed we were there. The problem is, that if you’re travelling to Moldova, you’re probably going to be quite a seasoned traveller and therefore you’re not going to be particularly amazed by it. 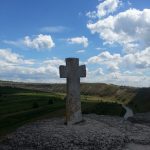 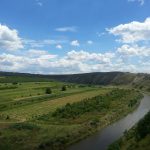 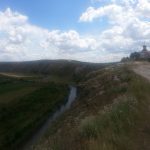 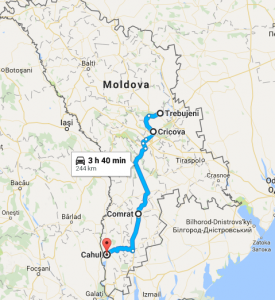 We were happy to leave Old Orhei, perhaps we should have gone to the Saharna and Tipova monasteries or Soroca instead. We drove 40 minutes south to Cricova and things seemed to slowly improve. A lady in a supermarket made us two 3-in-1 coffees with some boiling water and we turned up to the Cricova winery right on time. We took a tourist train with an English speaking guide into the underground labyrinth of wine. The guide was nice and the tour was informative. It was interesting to see the streets of wine and the bottling process.

The tour was broken up by a visit to a cinema underground. The 20-minute film, ‘What is wine?’ featured a combination of wine drinking pretentiousness and small country propaganda, and was something I could do without. The wine collection at the end was particularly interesting and contained some of Goring’s wine, which was confiscated by the Red Army in the Second World War, as well as wines from Algeria and Kyrgyzstan. The degustation seemed a bit dear because it included service and lots of snacks, so we passed up on it and spent our savings in the shop. 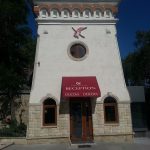 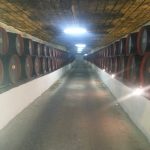 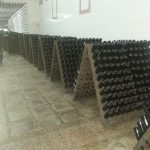 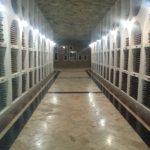 Putting diesel into our car is extremely problematic, there are two flaps and if the pistol doesn’t go deep enough inside then the diesel overflows and spits back at you. The Ukrainian petrol pump attendant resolved this issue by putting a hosepipe on the end of the pistol and pushing it down inside the tank. I tried to explain to the Moldovan petrol pump attendant the issues with the car and that it would really be better if I did it but he was reluctant to let me do so. Neither did he pay attention to my warnings that it would spit back, so he battled away with it repeatedly spitting diesel all over the petrol court and cursing it, then tried to convince me that the petrol tank was full but because we’d only put in 12 litres and I’d been on empty, I knew it couldn’t be. So I told him to wait and then try again. This time, the pistol went in deeper because I managed to readjust it while he was serving another client. He had to swipe the machine again and somehow it was reset to 0. I assumed he would stop at 12 or 13 litres which would make up the full 25 litres but he just kept going despite consulting with the woman behind the till.

I think we accidentally stole 12 litres of diesel in Moldova because the tank was almost full when I turned the engine on. Being unsure of how to explain myself to two incredibly grumpy petrol station employees, I just decided to leave it.

Gagauziyans are an ethnic minority in Moldova with their own language. They are a Turkic people with a strong love of Russia and they actually broke away from Moldova before Trans-Dniester but settled for autonomy rather than the complicated status that Trans-Dniester has. Comrat is the main city there and a place we happened to be passing through around lunch time. This was our third day in Moldova and we’d still not mustered up a smile from anyone in the service industry. Could the city that proudly displays a Lenin statue change that?

We stopped for something to eat at ‘VIP Pizza,’ which is bang in the centre. The waitress was friendly and helpful, we ordered lunch, charged a telephone and then stocked up on goods in the first large supermarket we’d seen in Moldova.The supermarket staff was also smiley. Things were looking up! Long live Gagauziya! 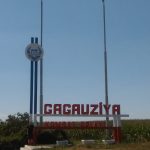 Our destination that day was Cahul, a border town near Romania. We had booked some accommodation with a pool to break the trip up a bit but we weren’t expecting too much from the town itself. Cahul’s streets seemed to be one endless market apart from the university building and a section with restaurants and bars which looked quite ‘civilised,’ as Sylwia put it.

In fact, Hotel Oasis was a pretty decent place to stay. The swimming pool was nice, the owner or guy working there was around when we needed him. A pint of beer was 12 Moldovan lei. We used a local bus to go to the centre in the evening which cost 3 lei per person, had some good affordable food at ‘Andy’s Pizza’ and then took a taxi back for 25 Moldovan lei. ‘Andy’s Pizza’ even had a little playground where our kids happily played with local Moldovans. I heartily recommend it. 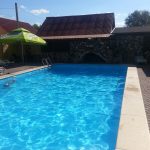 I really wanted to like Moldova and report back that it had been unfairly overlooked in European tourism. There really isn’t a lot to see, though. Near Orhei and Chisinau, I felt there was a lack of hospitality and lots of people were surly and unhelpful. The further south we went, the better it got though and the people of Gaugazia and Cahul were nice. Roads and border control are a doddle.

groove – a cut or depression on a surface

to skirt – to go around the edge

to pussyfoot (around) – to do something cautiously

confiscated – taken away by an official

pass up – refuse, say no to

to muster – to assemble, to bring together

bang in the centre – right in the middle

a doddle – something done very easily