Over the last couple of years, we have grown very fond of Macedonia and as I mentioned at the beginning of the blog, we have chosen several different routes to get down there. This was by far our longest and so by the time we got there, we were keen to slob around the pool for a few days. First up, though, it was Alex’s birthday. We did not want him to sit in the car for his whole birthday, so we tried to tailor the trip the best we could. We surprised him with a cake, played in the pool a bit and then made the short hop over the fast and uneventful Gyueshevo border crossing to Macedonia. 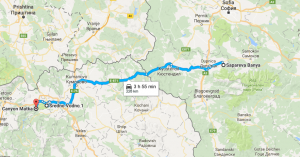 The cable car to Vodno Mountain

Towering above the country’s capital city Skopje, is Vodno Mountain which proudly looks down over the whole city and surrounding valleys. Marked with a large cross, some healthy folk ascend the mountain by foot, the more lethargic or those with small children can take the cable car from the cable car station at Sredna Vodna, which is reachable by a winding road leading out of Skopje.

At Sredna Vodna there is a big car park with free parking, a kiosk with refreshments, ice creams, plastic toy tat and some benches in the shade that you can sit and wait for the cable car. The cable car runs for the first half of every hour in the summer. The queue was almost non-existent and the tickets were an absolute bargain. Return adult tickets were 100 MKD and children’s tickets were 50 MKD. The ride takes about 10 minutes and we had the cable car to ourselves.

The sky was not very clear but the views were still rather impressive.The cable car ride in itself is quite an attraction but one of the reasons we chose this for Alex’s birthday is that there are a couple of playgrounds on the top. Overall, I thought it was really great value. Unfortunately, we were on the verge of a storm but on a clear day, it must be mesmerising. 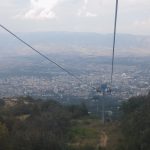 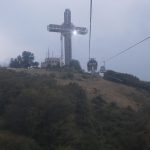 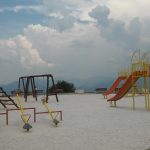 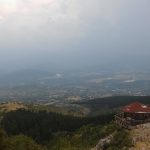 View on the other side of the mountain

The mountain is often used as a starting point for a hike to Matka Canyon, which incidentally, was also our next destination. We’d heard plenty about Matka Canyon and it was definitely the biggest site in Macedonia that we had not seen. We’d booked a night in the hotel there which looked pretty good on Booking.com and had good ratings, so we were looking forward to it.

We descended the mountain by cable car and then in our car made our way through Skopje in the rush hour, which was surprisingly easy. We then got on the main Skopje-Gostivar highway, a road I know fairly well. I was overly confident though and passed the turn off because the sign read ‘Matka Canyon 5000m,’ which I assumed meant that the junction was a further 5km up the road but it was in fact exactly where the sign stood. Much to my frustration, we were heading on the motorway in the wrong direction and had to go to the next junction to turn around, which including passing through the same toll twice and doing about 40km extra. This was not a good start to our Matka Canyon visit and it did not get much better from then on.

We had spent the previous two weeks in relative solitude, occasionally coming into contact with tourists but always in a small number and usually locals. Matka Canyon and the sheer volume of tourists was very much a shock to the system. People were everywhere. The road is narrow with jagged stone cliffs to one side and people parked along the road, so it’s hard for two cars to pass one another. This busy little road ultimately leads to a steep one-way road that runs into a car park. Unfortunately, in our case, there were three cars in front of us and nowhere to park, so all the cars did their best to manoeuvre and reverse back down the hill, while tourists wandered around, usually hovering in my blind spot, much to my annoyance.

After eventually parking the car without scratching it but still worrying that the car parked next to me might when leaving, we set about finding the hotel. A signpost for the hotel led from the car park along the canyon and pointed along a narrow walkway which clung to the cliffs of the canyon. With every new corner, I could see that Sylwia was getting more fed up, after all, we were lugging rather heavy bags with us and the path was full of tourists. Finally, the hotel and restaurant appeared, right on the waterfront but not quite how I imagined, it was evidently going to be a noisy place rather than the idyllic spot we’d imagined.

Despite the location, the hotel was overpriced for what it offered. The breakfast was about the best thing it had going for it. We rented two rooms and one, in particular, was shabby, to say the least. The shower basin was broken, the toilet was cracked and leaked, there were light fittings hanging from everywhere. Not something I would complain about if it was budget accommodation but this was supposed to be a bit plush in a romantic setting. The restaurant menu was posh and expensive, so if you want snails and truffles to go along with the whiff of backed up drains in your room, then this should be very much your accommodation of choice. The meals we did have were good but cost an arm and a leg, particularly by Macedonian standards. The included breakfast was also very good, the restaurant toilet was an absolute abomination, covered in faeces and comparable to the worst camping toilet you could imagine.

You might see impressive pics of Matka Canyon with people posing between the high cliffs and green waters and think that looks nice. Unfortunately, no one shows you the bad side and so you might actually be disappointed when you get there. It probably is very nice out of season but in high season it is just a constant trail of people, leaving litter behind and waiting in turn, to take photographs in the same location. Not only does litter overflow from the designated rubbish bins but it also lies on the banks down to the dam.

I am a huge fan of Macedonia and was very disappointed at just how spoilt this site was. I would like to go back out of season to compare it and to hike deeper into the mountains but I’d certainly never return in high season. For similar impressive sights in the area, I suggest Mavrovo National Park in Macedonia, the Una River and Tara Canyon in Bosnia and the Pivsko Jezero in Montenegro. 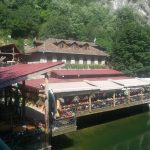 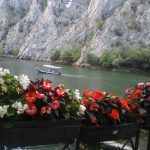 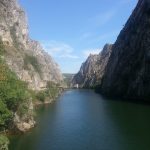 Idyllic view when no one is around 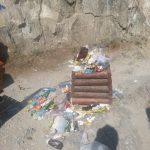 The untold story of Matka

to slob around – to be lazy, not worrying about what you wear

to tailor – to make something fit

jagged – with rough or sharp points

hovering – here: wait around nearby

fed up – irritated, at the end of one’s patience, miserable

whiff – a hint of a smell or passing smell