Mariovo and the lost ‘Bila Kangoo’ 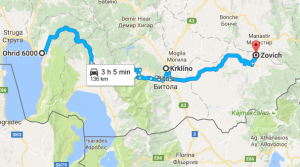 Macedonia is a small place but it’s packed with places to visit, some of them are rarely visited by tourists and some of them even fairly unknown to Macedonians. The 2nd August, it is a national holiday where Macedonians celebrate a short-lived uprising from Krusevo against Ottoman rule. Although the uprising ultimately failed, it would sow the seeds for a successful independence movement.

It is celebrated with a march from the capital of Skopje to the hill town of Krusevo. Lots of Macedonians also descend on Lake Ohrid to enjoy themselves and many go to Lake Prespa too. As usual, we were keen to avoid the crowds and decided to head towards Bitola. We had visited Bitola the previous year, it’s a lovely little town and the kids enjoyed playing at the playground there. An entrepreneurial shopkeeper had put old amusement rides outside his shop, which was a magnet for kids!  Nearby is Baba Gora, also a great place to go hiking.

This time, our destination was the small village of Krklino, located just off the road to Prilep, where there is one stand out attraction, the Auto & Ethno Museum. As you enter the courtyard through a narrow gate, there are several classic cars including a VW Beetle, an old Moskovich and a Zastava. Then there’s a large garage with a collection of old motorbikes, radios, gramophones and albums that have been collected from all over Macedonia.

The adjacent room contains about 6 classic cars which are used for weddings. Impressively, these have been collected by a young man called Filip, who is on hand to guide you. This is a private collection and was started by his father, who we met later on. Some of the items were family heirlooms.

The upstairs is split into several themed rooms including a traditional Macedonian room, a traditional Jewish room and a traditional Turkish room. Traditional tools, musical instruments, weapons and everything imaginable including family photos, were all exhibited. I found it fascinating and could have spent a lot longer there but Sylwia was keen to get a move on and visit Mariovo, a decision which proved to be the right one as the day became a lot longer than expected. Filip’s family invited us for drinks and some home made cakes and we spoke to one of his father’s cousins who lived in Australia. 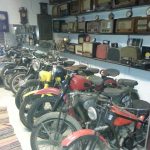 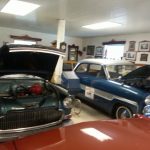 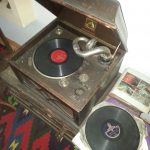 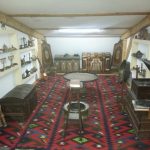 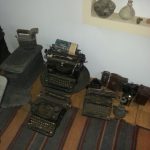 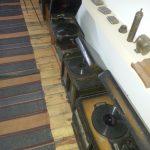 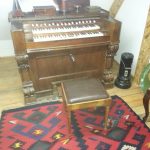 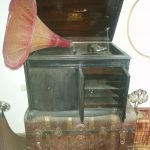 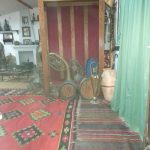 With a tummy full of freshly baked cakes, we headed off to Mariovo, a mountainous region that borders Greece and is known for its depopulated villages, wild mountains and a picturesque stone bridge.

Leaving Bitola on the road to Novaci, I noticed a graveyard that looked a little out of place. The graves were lined neatly with little crosses. It was clearly a military graveyard and one that seemed reminiscent of those in the Somme. At first, I mistook the French flags on the graves for the Yugoslav flag but on closer inspection, it was most definitely the ‘Tricolore’.

You might find it being misreported that they are World War II graves but the 1914-1918 emblazoned over the arch is a bit of a giveaway that it’s a World War I graveyard.The cemetery marks the resting place of 6,000 identified and 7,000 unidentified French soldiers, including many, Muslims from French colonies.

There was also as many as 4,560 British soldiers killed in the area as they battled alongside the Serbs, Italian and French against the Bulgarians, Germans and Ottomans in what was ultimately a failed operation.

Many of them died from malaria. Known as the Monastir Offensive, history buffs can read up on it online, meanwhile, I’ll get to the pretty pictures of the bridge as soon as possible!

Like the northern part of France, there is something eerie about the area and tales of hidden brandy or worse – minefields, abound. Young people have left the area and there are far more houses than people.

Having passed through the villages of Logovadi and Novaci, the road starts to climb. There is a power station on the left and a landfill site further up on the right. The stench is horrible and you may be tempted to think that Mariovo’s beauty is a myth.

Keep driving, the smell soon passes and the countryside returns to being scenic. Although the road is tarmacked, plants had forced their way through it and bushes had not been cut back for a long time. Thankfully, with no cars around, driving in the middle of the road to avoid scratching the doors is not an issue.

Next up was Makovo, a rather linear village. With it being a national holiday, a small number of people were starting to gather outside someone’s terrace. The terrace proudly sported amps and a keyboard.

We continued to the village of Rapesh, though the buildings were numerous, many of them were empty and in various states of disrepair. 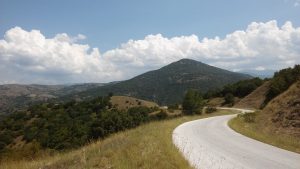 Soon after Rapesh, the road turns into a dirt track, winding down and back up a valley. It had obviously been washed away as there were grooves in some parts, occasionally there were also very large rocks which were easy enough to avoid but could have wrecked the car’s undercarriage 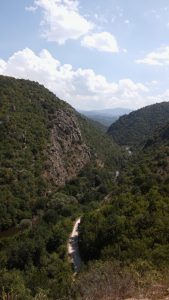 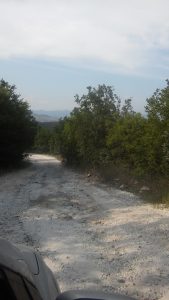 The views are spectacular, which is just as well because we couldn’t have been topping more than 30km/h. The first driver we spotted after half an hour was from Slovakia. He saw the Polish plates on the car and wound his window down to assure us that it was worth going and that it would take a further 10 or 15 minutes.

After 11km of this bumpy, steep road, we reached the summit and a sign for Zovich and a monastery. We turned left as Zovich was our destination. Travel in these parts takes a lot longer than it looks on a map. If you were to attempt a visit to Kajmakcalan or Petalino, you’d need to be up seriously early in the morning.

From the junction at the top of the hill, the road has been recently paved and wiggles its way for 5km across a barren hillside. Zovich is slightly more inhabited than Rapesh but there are still plenty of large stone buildings that have been left unattended.

We parked up outside the bar at the end of the road and continued on foot to the small canyon, magnificent views and the famed stone bridge. 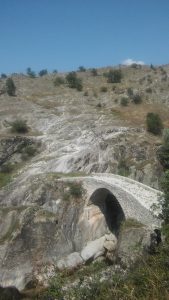 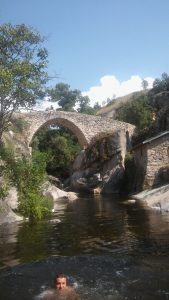 The stone bridge was built in 1950 to replace a wooden one which had stood there for hundreds of years. Its wooden predecessor collapsed under a heavy load when a villager tried to ride over it on his horse and waggon. The villager was rescued by the miller in the mill next to the bridge and although maimed, apparently went on to live to a ripe old age. This manmade structure blends seamlessly into the surrounding rocks. Locals were quietly sunbathing on the rocks and taking a dip in the river. The little dam near the mill acts as a natural pool.

After taking some snaps, it was getting on for 4pm and high time we had some ice cream, so we popped into the bar. We encountered three very muddy pigs who were trotting around the village but were a little too fast to photograph! 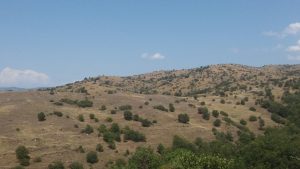 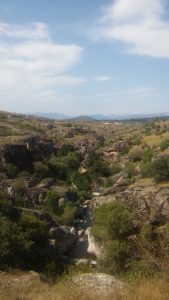 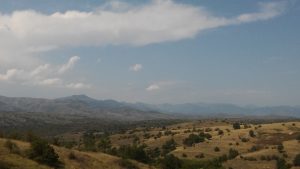 On the way back, we were flagged down by a rather sweaty man who enquired about a ‘Bila Kangoo’. Unsure what to make of it, Sylwia feared the worst, that the bridge at the bottom of the valley had collapsed. I thought he was talking about kangaroos. As we pondered over what this chap was talking about, a car pulled up behind us and as they were locals they seemed much more adept at handling the ‘Bila Kangoo’ situation.

Further down the hill, we came across a white Renault Kangoo which was parked up. It dawned on us that the guy had been looking for his car, having hiked in the hills and rejoined the road, he was unsure whether his car was up or down the mountain and was asking us whether we had seen it. The Bila Kangoo mystery had been solved and we noticed that the driver was reunited with his vehicle a few minutes later.

Passing through Makovo on the way back, we noticed things had livened up at the village party, several villagers danced to Balkan style beats on the main road with children on their shoulders. Our trip back was event free until we got on the main road from Bitola to Ohrid.

The roads were much busier than usual and there was rather a lot of reckless driving going on. Macedonia has several roads where the middle lane is used by cars on both sides and big powerful motors play chicken with one another as they head towards a head-on collision.

It’s usually not so bad because there isn’t a lot of  traffic but it was notably lively that evening, no doubt a result of the holiday and drink driving. On the mountain pass between the two lakes, we saw a motorbike which had flown off the edge of a ravine. Police were at the scene and there were a couple of curious spectators. It was an eventful ending to a great day!

Glossary:
packed – full and tightly compressed
sow the seeds – to plant an idea, to be the forerunner to something
magnet – here: a source of great attraction and interest
adjacent – next to
heirlooms – valuable objects that have been in the family for generations
split – divided
to get a move on – to hurry up
headed off – left/went in the direction of
emblazoned – conspicuously covered or displayed
buff – an expert, someone with a high level of interest and knowledge on a subject
landfill site – a place where domestic waste is buried
spotted – saw, noticed
pondered – wondered, thought about
dawned on – came to realise
play chicken – to play a game of dare or brinksmanship