Craft beer and a delinquent deer

We’ve been back a good six weeks now in Poland and after a long trip and relatively lazy summer, it took a little while to adapt to the rigmarole of daily life. I was keen to make use of the good weather and continue doing a bit more exploring, particularly on the weekends. I know Kampinos National Park like the back of my hand as I often walk and cycle there, I was looking for something farther afield but still in the vicinity of Warsaw and came across a nifty website that details lots of hiking paths throughout Mazowsze -http://mazowsze.szlaki.pttk.pl – it’s also an app. My phone was running low on memory, so I didn’t use the app.

The route that tickled my fancy the most was the Szlak Niebieski / Blue Path from Cieksyn to Pomiechowek. My wife’s family have a country house in the village of Krolewo, I often run in the area and we sometimes kayak along the Wkra. Due to its proximity, it was the most convenient route to start. I ran through the villages of Krajeczyn and Popielzyn Dolny before getting to Cieksyn after an 11km run. Cieksyn is the start point and the path is about 18km long, winding its way alongside the river. I had hoped to follow the markings until the end but quickly lost them, I decided to stay as close to the river as possible and quickly found the trail again.

The upper part of the route was quite overgrown and several trees had recently fallen. The path carved a small opening between a wooden fence and the river bank which was heavily populated with thick bushes. I came across a large deer that was startled by the sight of a gingery Brit. After eyeing me up, she thundered down the path. I had just about forgotten about her when we met again, she was doing her best to hide in a bush but realised it was fairly poor cover and panicked once again when I appeared, this time she chose the rather unorthodox approach of running past me, she was somewhat ungainly due to the slippery mud and I feared a collision!

In Golawice Pierwsze, the path follows the main road and it is probably the least interesting part of the route. The route then drops down to the river again and becomes much more enjoyable, it’s well signposted and well maintained but a lot quieter than I had imagined. With about three-quarters of the route done, the path comes to a crossroad of hiking paths as it meets a red route which runs from east to west. There’s a footbridge that spans the river Wkra and leads to the village of Kosewo, which has a nice sandy beach that looks ideal to play volleyball on.

The blue path then veers away from the river, climbs a hill before dropping back down again and enters a forest before finally finishing in the centre of Pomiechowek. I expected it to take me three hours but it actually took around four. Considering I got a bit lost at the beginning, kept stopping to take photographs and also that I’d ran for an hour before walking, it’s feasible to do it in about three and a half hours. 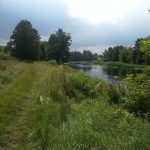 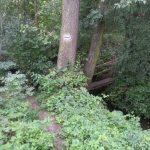 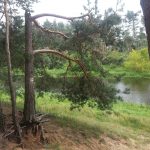 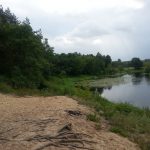 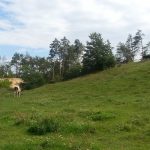 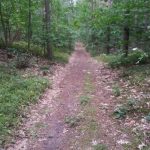 When we first came back, I set myself a somewhat rigorous schedule of races to participate in but this was largely put on hold due to my discovery of a fantastic local pub that sells great craft beers, Czech lagers and wine on tap. Beer Hub has a nice little beer garden, friendly staff and plays great music. The summer lasted longer than expected and we spent several warm evenings there, enjoying the flavourful beers and devouring overpriced nachos. I’d love to tell you the name of my favourite beer but I haven’t decided yet!

I had the chance to get more closely acquainted with some of these craft beers once again when many of the breweries had their stalls at the Beer Fest in Progresja on Friday and Saturday 16/17 September. I was impressed with Native Girl beer by Tattooed Beer in Kraków  and also had a fondness for the Spirifer Browar football range – The Kop and Striker. I recall the Russian Imperial Ale by Browar Perun being dangerously smooth yet somewhat potent. The WhyDuck range also seemed good, but by that time it was hard to tell whether I was a good judge or not.

As autumn begins today, it’s getting a bit nippy for beer gardens and I will be moving my attentions to museums and possibly, hiking in the cold.

To tickle one’s fancy – to appeal to one

To eye up – to look at, assess

Panic – to be alarmed, to react in an uncontrollable way, without thinking

To devour – to consume quickly and greedily